My inner Princess of Power

September 21, 2013
When I was six years old, I had the best Halloween costume ever. I seriously wish I could find a picture. I was She-Ra, Princess of Power.

I distinctly remember my grandmother making a leotard get-up with a skirt for the main costume. Some combination of my mother and my aunts created the elaborate headpiece, probably out of glitter, paint and cardboard. My dad took a boy's play sword and spray painted it gold so it would look like She-Ra's. Then, there were the boots.

My dad took the same gold spray paint and painted my once brown boots a sparkly gold color. I thought they were the most beautiful thing I had ever seen. I wore those boots even when I wasn't in costume. I wore them until they were far too small and hurt my feet. My family taught me as a girl, I could do anything I wanted. My drive and ambition were the only limitations they told me I had. So, in my mind, I was She-Ra and She-Ra was awesome. She might be a princess, but she wasn't sitting around waiting on some boy to rescue her. She was out there, wearing awesome boots, doing the rescuing, kicking butt and taking names. She raised her sword above her head and said "For the honor of Grayskull, I am She-Ra, Princess of Power." She was poised, powerful and in control. And, she had some rocking fashion sense. 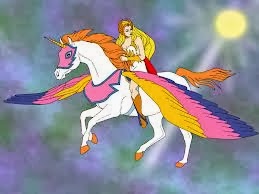 I thought a lot about She-Ra this week. To be more specific, I though about how I wish I was a little more like She-Ra in my adult life.  It was a busy week our household, with work deadlines and other things that just seem to crop up. The big item on the calendar was my mid-cycle ultrasound at UNC this week. Since Jeremy's back in school, I'm being a big girl and going on my own to those appointments. The night before I was so nervous I barely slept. I tossed and turned, worried about what would be next if the Femara was just like Clomid. She-Ra would have been disappointment with me.

Guess what? I still don't know what come after Femara.... at least yet. Apparently Femara is She-Ra's (hence, Becky's) drug of choice. When I went to the scan, Dr. C and Dr. G (2 other doctors at UNC Fertility) saw three mature follicles that looked ready to ovulate. Dr. M was very psyched about the scans, emailing me about 10 minutes after I left the office to tell me we had found my dose. Princess Adora put away her soft side and She-Ra came to town. So, no worries about injectibles for me yet. This She-Ra's ovaries are kicking butt and taking names. No gold boots required.

We started testing for infertility in August of 2012. We've been trying for superovulation since May of this year. It's been frustrating for it to fail every month. It felt like it would never happen. But my ovaries decided my mother's drug was just what the doctor ordered and they kicked it into high gear. It was honestly as good as we could hope for. For what it's worth, this already feels a little like a win.

On Thursday of this week, Jeremy and I had our second interuterine insemination. It was remarkably uneventful and even the female Dr. M (a different Dr. M than my normal doc at UNC) who performed the procedure said (in her words) it all went "easy-peasy."  I spent longer waiting for the doctor to come into the room than it took her to do the procedure. At the end of the day, IUI has been much easier (physically) than I ever imagined it would be.

So, where are we now? We're back to dwelling in possibility, even though I didn't see Emily this time. (On a side note, the doctor's first name was Jennifer, just like my sister. Maybe there is yet another connection...) We wait for two weeks to see if we had success. I belong to some online support communities for infertility and the women on these boards like to call positive pregnancy tests "unicorns" since, for many of us, they are mythical things we have never seen. I googled She-Ra to find a picture for my blog, only to realize that her mode of transportation was.... wait for it... a unicorn. So, this month, I'm hoping She-Ra's unicorn, SwiftWind, might be symbolic of my very own unicorn. This princess of power is going to keep on being as poised, powerful and confident as I can be. After all, I have to live up to my early princess of power beginnings and make She-Ra proud. Now, where are those gold glitter flats I bought last year? :)

I was rocking him, giving him a bottle after a late-night sheet changing, clothes changing incident. We were snuggling under the fuzzy blanket and I was singing (horribly) as he cooed along. I was soothing my little one like I've done for the last seven plus months.

Then he pushed my hand away and repositioned his little fingers on the bottle, deftly keeping it in his mouth, right where he wanted it.

It's a natural progression, right?

I should be proud he is showing increased manual dexterity and progressing with his motor skills, right?

My perfect little boy will be eight months old on Saturday. I still haven't wrapped my mind around that-- not really.  He's so big and so tiny, all at the same time.

We've been sleep training and working on sleeping in his crib instead of the bassinet which once rested beside my side of the bed. For the first week of this transition,…
Read more