October 11, 2014
Once again, I'm joining the infertility blogging community to share my story of discovery. This time, I'm sharing the moment when I first learned the truth about my fertility challenges.

The moment I knew, my entire world shifted on its axis. Time simultaneously stood still and moved forward at breakneck speed. Nothing would ever be the same again. 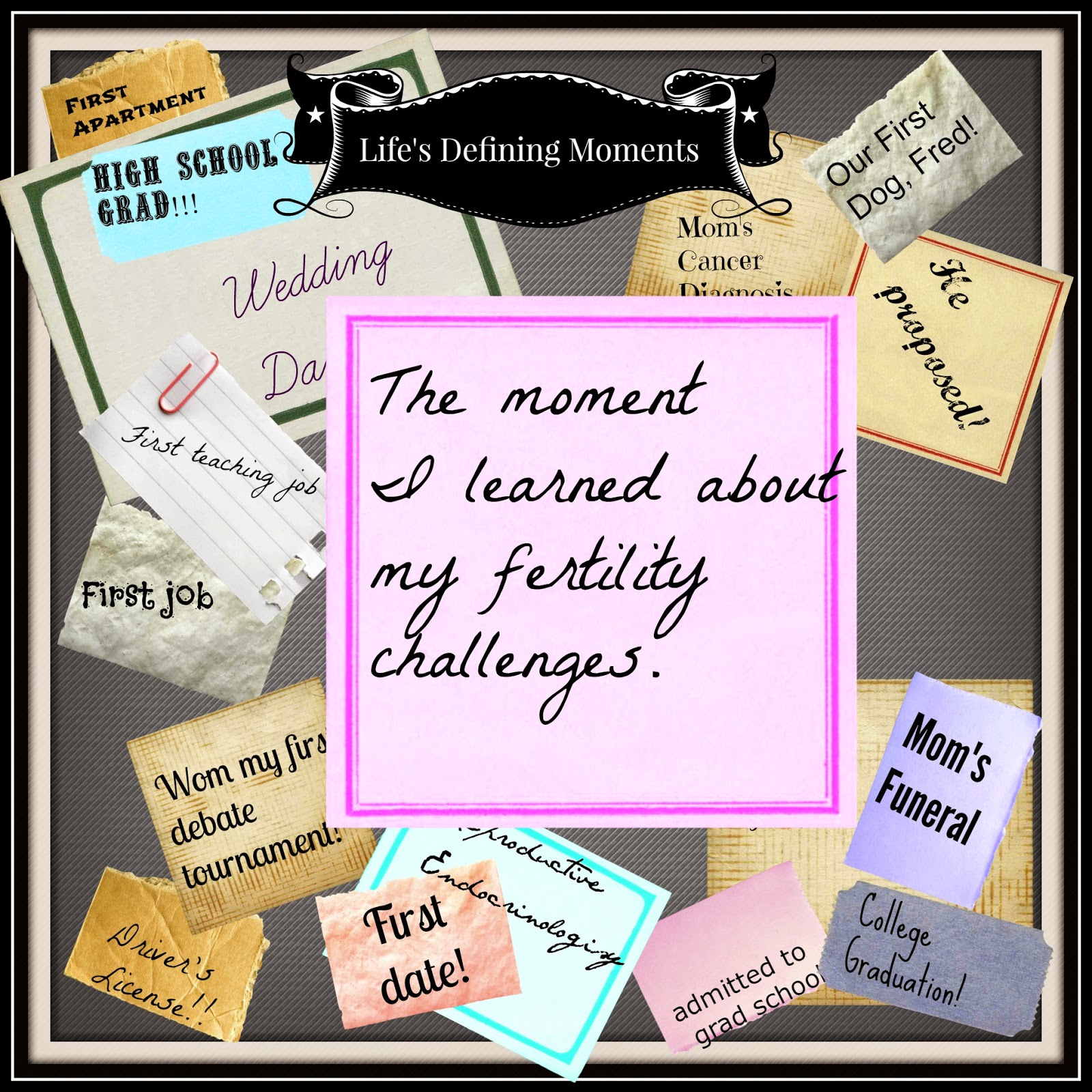 When Jeremy and I moved to a new place, I made a promise that I would find a new doctor right away, that I wouldn't put off my annual exam "one more time" like I had done for far too long. Losing my mom when she was merely 48, I knew it was important to visit my OBGYN regularly. But knowing and doing were two VERY different things.

I stood in the conference room at work and scheduled an appointment at a well respected, local OBGYN practice that emphasized being "for women, by women." During the call, I was initially slated to see a different doctor, someone besides the now infamous Dr. S. But, as luck would have it, I was busy on that day, so I was switched to a spot with Dr. S. When I wrote HIS name down, I remember hearing it as a woman's name. Imagine my shock when I met Dr. S and he was very much not a woman. For women, by women my big toe.

From the onset, Dr. S put me at ease. I remember the standard questions and the way he paused when he asked about children and pregnancies. I started to tear up a bit when I said there had been none. He asked the next question with so much compassion: did I want children? I guess there was a reason I got the new, male doctor.

The waterworks came on in full force and, to his credit, he simply handed me a tissue and game me a few moments to pull myself back together. He sat and listened as I explained my wonky body.

Then he came up with a plan.

The very next week, he insisted on meeting my husband to set the new plan into motion. I had blood drawn and was scheduled for an ultrasound after that meeting. He assured me it was all perfectly routine and he believed I would be pregnant in no time.

Dr. S suspected I was dealing with PCOS. Since PCOS is diagnosed through finding two or more symptoms of the condition, one of the "easiest" tests is an ultrasound. You know. The WAND kind of ultrasound.

I went into the office for the routine procedure at 1:00 in the afternoon. I remember joking with the lady doing the test while I "prepped" for it. Once we were respectively situated, she much more comfortably than I, we began. At first, she kept up the polite chatter about her grandkids and the local events that were going on. But, I noticed her comments became more and more sparse. The wand became more and more painful, as though she were checking "something" more carefully.

As I had never been through one of those exams, I wasn't exactly sure what normal was. However, I was pretty sure that was NOT NORMAL.

Finally, I got redressed and headed back out to the waiting room, since my appointment with Dr. S was 30 minutes later. I figured I would read a couple of chapters and wait it out. He had different plans.

Upon seeing my initial scans, he ordered a second, 3-D ultrasound. When they called me back, they couldn't say anything. Dr. S was with another patient, but they told me I would see him as soon as I finished the second ultrasound.

If I thought the first one was uncomfortable, it was just a warm-up for the second act. (As an aside, they were both warm ups for the litany of ultrasounds I have endured at the hands of various and sundry reproductive endocrinologists, medical students and nurses).

As the second ultrasound tech carefully examined all of my internal "girl parts," I became increasingly more and more concerned. The second ultrasound was twice as long as the first, and I'm pretty sure my uterus and ovaries though Brad and Angelina were visiting with the paparazzi like ferocity of the camera.

Lying on that table, undressed from the waist down, completely vulnerable, I had a sinking feeling that something wasn't right. Something was different from what they expected to see. We were already anticipating unusual... so what was even more abnormal?

When I redressed, I was escorted into an exam room where I sat, alone, trying to figure out what was going on. I was only there a few minutes, but it certainly seemed like hours. Dr. S brought in the portfolio of my photogenic ovaries and uterus, which showed what he expected-- the pearl necklace of PCOS-- but also something else.

In typical Dr. S fashion, he was down to earth and fantastic. He told me that I needed to have a hysteroscopy and laproscopy. He explained everything calmly and patiently. I remember hearing "routine" and "outpatient," but surgery was the bigger thing looming in my mind. I took in as much as I could and left feeling like the world was closing in on me.

I made it to my car, made it back onto the interstate and tried to call my husband the entire drive home. It was a Friday afternoon, so he was out with his friends from work. They were relaxing and having a good time. He never heard his phone in his pocket.

I was fine until I heard his voice, When he finally called me back, nervous because he had missed roughly 20 calls from me, he could tell it wasn't good news. It all became real when I told him I needed surgery.

All in all, the surgery was fine. It wasn't too bad and I recovered quickly. Whatever was concerning on the ultrasound was gone when they went in to look at it. We learned a few more things, but nothing that shed any more light on my situation. However, it was my first experience with the bizarre world of infertility.

Unlike most areas of medicine, there are still so many mysteries in the process of creating life. Figuring out fertility issues is a process of elimination experience. But, no matter how many tests come and go, no matter how many key moments occur, nothing will ever feel like that moment when I first realized I couldn't do this on my own.

The first moment I knew ripped away my innocence and thrust me into a world I never imagined I would be part of. I can never go back again, andI will always be a different woman because of that moment.

The Long Way Around

A friend of mine, and fellow infertility blogger, Jess has encouraged me to seek some avenues to expand the readership of my blog. Today's post is an experiment in this, as I am taking part in "Microblogging Mondays" as part of the blogging community.

As I was getting ready for work this morning, I was thinking about the long way around and how, in my life, it seems like that is precisely what gets me to my destination, at least most of the time. I refused to date my now husband for the first year I knew him. I attained a degree in English and political science, then went to grad school in professional communication instead of taking the direct route to become a teacher. I have lived in 4 states and even more residences before deciding to make the commitment and buy a house. I guess it is only fitting that our path to parenthood is taking us on the scenic route instead of the direct path.

Though I am a West Virginia girl who enjoys a good, road trip on some old County R…
Read more